Who can be considered a "Utah Filmmaker"? 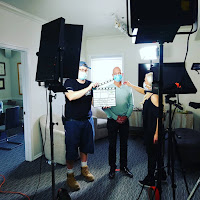 We have a very broad and inclusive definition of the term

* We are primarily filmmakers that live in Utah, but there are also a number of filmmakers out there that are originally from the Intermountain West who think of Utah as home, as well as those who divide their time between Utah and other film production markets, from L.A. to New York, and Ontario to New Mexico. Regular participants in Utah-based film festivals from across the country and around the world are also welcome to wear the moniker—literally.