How saving a few bucks now can potentially backfire later… 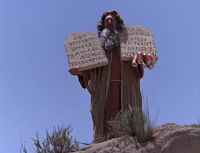 Nb. I was not personally involved with the production of “Good Joe Bell” in any capacity beyond an audition for a small role set aside for regional day-players like myself—I did not get the part but I’m not one to hold any grudges. My knowledge of the production and its management is based mostly on publicly available information and through conversations that I’ve had with Utah-based contractors who were either hired for the film or had direct contact with others that were. My intent in writing this essay is not to question the actions or intentions of the producers because it is my sincere belief that the issues that I discuss can be most likely attributed to middle-management positions that may or may not be local hires. All that being said, I wish to draw attention not to any individual person making such decisions but to the impact that they have, not only on the production itself but on the community in which it was operating.—Joe Puente

Anytime that a film production makes its presence known in any community, it can be very exciting for the locals. Who doesn’t get a thrill when they see a famous face in person for the first time? Even celebrities get giddy when they meet other more famous celebrities. Community business owners can also get excited by the prospect of a movie shooting in their town, especially if they have a product or service that the production could use. In short, making a movie costs money and that money gets spent wherever that movie gets made. It’s for this reason that film commissions exist—usually operating under the auspices of government economic development agencies—to promote their communities as destinations for producers to make their films. In addition to highlighting available filming locations, local industry services, and talent, governments also allocate resources in the form of tax incentives and rebates to attract film and television productions to their states.

It’s not uncommon for state and/or municipal governments to offer tax breaks to established corporate brands as an incentive to create brick-and-mortar operations in their communities. The thinking behind these efforts is that the short term cost in waived corporate or property taxes would be offset by income and sales tax revenue resulting from all the new jobs and economic activity that the incentivized company will bring to the community. Of course—if not properly considered—such incentives could potentially be too generous, turning such incentives into wage subsidies.

Film incentives don’t work like that. Instead of waiving taxes or fees to attract productions, they are simply offered a rebate that is tied directly to the amount of money that the production spends within that community. One such production was the film “Good Joe Bell,” starring Mark Wahlberg, which was filmed in Utah in 2019.

Even with a recognizable name like Wahlberg attached to the project, “Good Joe Bell” was “independently” produced without the resources of a major studio so it was considered a “low-budget” film—at least, compared to other major releases. It’s not uncommon for below-the-line management types to allow the “low-budget” nature of a project to induce a scarcity mindset which is then used to justify lowballing venues and contractors. It’s one thing when you’re trying to get a reasonable rate while you’re still in pre-production, but once the cameras start to roll, the budget is essentially locked and the time to haggle has lapsed. In the mind of a Line Producer or Unit Production Manager, dealing with day-to-day operations, they might still jump at the chance to get something for “free,” thinking that they’re “saving money” for the production. While it may be technically true that something of value may be acquired or used for a time that they—e.g. the production—did not have to pay for, they forget that it’s most likely going to be listed as a loss in revenue on someone’s balance sheet.

“Good Joe Bell” was no exception to this phenomenon. In the spring of 2019, the production paid a Utah high school for the use of its approximately 2,200 seat football stadium. However much that rental fee was, it did not include the cost to fill those seats with cheering sports fans. The going day-rate for a background actor in Utah has remained static for several years at $101.50. That breaks down to the federal minimum wage (since 2009) for the first eight hours plus overtime for the final four hours of a typical 12-hour production day. The cost to fill that stadium for one day of shooting would be around $223,000.

Assuming that the scene in question was always part of the script, it had already been broken down, the number of extras needed and the cost for hiring them calculated and factored into the budget, which was then approved prior to the start of production. Despite this hardly atypical scenario of accounting and resource management most likely having been addressed, a decision was made—by whom, specifically, this author does not know—to persuade people to sit in the stadium without being paid.

Casting background talent for a film is not an alien concept to experienced filmmakers. Any producer that’s able to get the signature of an established, recognized actor onto a non-binding letter-of-intent and transform that into enough funding to make a “low-budget” feature, isn’t going to be hobbled by the prospect of casting extras. It’s just a given that an Extras Casting Director will need to be hired at some point. 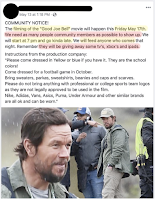 About four weeks prior to the stadium shoot, a post from one of the high school’s official social media accounts, excitedly invited members of the community “to participate” in filming a scene for a movie “starring Mark Wahlberg” at their stadium in which the “young men of our football team will play a role…” In an effort to entice them to fill the grandstands, “participants” were offered a chance to win a raffle and go home with a new TV, gaming system, or tablet, generously provided by “the film company.” According to local industry gossip, this tactic to “save money” on extras for a single day of production did not work as well as had been hoped. It also created problems as far as their efforts to “re-create the energy and excitement of” a high school football game. I’m curious to see how that particular scene is framed in the completed film. 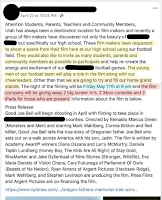 This all begs the question, why try to get “free” extras if the production knew that extras would be needed and factored that knowledge into their budget?

As I stated above, it’s the scarcity mindset embraced by below-the-line management types. Filmmaking is a job, like any other, and people with any modicum of responsibility want to get noticed, which—in the minds of some—is most easily translated into “saving the production money.”

In the world of “independent film,” there is no end to stories of would-be auteurs like Robert Rodriguez and Kevin Smith, “saving money” by shooting their features on 16mm instead of 35mm film, using real locations after hours instead of building sets, having actors apply their own makeup, calling in favors, getting friends to “donate” their time for the sake of a “passion project,” etc. Of course, those stories are famous because they’re flukes. The subsequent success for such filmmakers wasn’t the result of breaking rules, it was being lucky enough to get away with it while telling stories that resonated with their audiences.

When a production has budgeted a specific amount of money for something that is integral to telling the story, not spending it does the production no favors. In the case of “Good Joe Bell,” this attempt to “save money” by not spending it on background talent worked against the production in two ways. The aforementioned rumored difficulties in realistically depicting a sporting event as well as a reduction in the economic incentives that brought the film to Utah in the first place.

“Good Joe Bell” was approved to receive up to $1.38 million from Utah’s Motion Picture Incentive Program—that’s 20% of $6.9 Million dollars that the production was projected to spend in Utah. Yes, a multimillion-dollar budget can still be considered “low,” especially when you consider that this particular shoot cost less than half of what Wahlberg was paid to be in a $210 Million “Transformers” sequel.

If the production had budgeted to hire enough extras to fill that football stadium, at the end of the shoot—following an independent audit—they could have counted it toward their rebate. In the end, filling those seats would have only cost about $179,000, or about $81/seat instead of $101.50. However, since they did not spend that money to hire local Utah background talent, they could not include it in their final tally when applying for the rebate. So, whoever thought that they were going to get a pat on the back for saving $220,000 actually wound up potentially costing the production by reducing their rebate by roughly $45,000. Productions often count on those rebates and factor them into their post-production budget. $45,000 in lost post-production resources is nothing to sneeze at. That old saying, “Penny wise and pound foolish” comes to mind.

The scarcity mindset comes with a myopic perspective of how the economics of film production works. By focusing only on the bottom-line—which often isn’t even part of the job description for middle-managers—they fail to see potential consequences to the production like those described above until after-the-fact, if at all, and are even less likely to consider its impact on the local community.

The whole point of government-funded incentives for film production is to benefit local economies. The cost of production rebates is significantly offset by the production’s spending on the use of local venues and services, and the hiring of local contractors—including background actors. Filling a high school football stadium wouldn’t have just “cost $220,000,” it would have created over 2,000 jobs, even it was just for a single day. All of those “extras” are people who have lives to live and bills to pay like anyone else. Working for one day on a film set just might cover a utility bill or a loan payment. People can’t pay their bills with a raffle prize, or a story about being in a movie with Mark Wahlberg—most likely as a blurry figure in the background for a 5-second shot. To say nothing of the fact that the use of unpaid labor is against the law. Though, I have no doubt that the “participants” were provided with appropriate and valid documentation to sign, clearly indicating their willingness to waive their rights to be compensated. Of course, just because something might be legal, doesn’t mean that it’s ethical or morally justified.

A little over a year after they wrapped production in Utah, the “low-budget” film, “Good Joe Bell,” premiered at the 2020 virtual Toronto International Film Festival where it sold for $20 million ($20,000,000).

I’m curious to know the thoughts and feelings of any locals that were convinced to work on that film without being paid, once they have been made aware that their uncompensated time and effort helped to make that sale just a little more profitable… for the producers.