Dear [I wrote to both my Legislative Representative and Senator individually],

I am reaching out to you as one of your constituents to respectfully request your support for Utah’s Motion Picture Incentive program.

I am also the primary Administrator of the Utah Filmmakers™ Association, which has a mission to engage aspiring filmmakers to embrace industry standards through mentorship and collaboration with Professionalism, Integrity, and Respect; and endeavors to bridge the local film community with Utah’s film industry.

Were it not for Utah’s film incentive, Utah’s filmmakers would not have nearly as many opportunities to work in their chosen field as they do. With the growing demand for original motion picture content in recent years, many other states—as well as other countries—have implemented and/or expanded similar film incentive programs to attract new productions and the economic benefits that they bring to their communities. Even to the point where productions that once called Utah their home, have followed better incentives to other markets. Regardless of those notable departures, the incentive still draws more applicants than it is able to support, and while Utah’s film industry continues to benefit the State’s economy, there is potential to attract even more productions to the state, bringing with them even more opportunities for Utah’s filmmakers to put their skills to use, hone their craft and—most importantly—continue to call Utah their home.

The principal way that the Utah filmmakers™ Association engages with the community is through social media. Our primary official forum is the Utah Filmmakers™ Facebook group, which has over 10,000 active participants. In recent years, it’s been disheartening to see a few of our members regretfully announce their relocation to other film industry markets with more competitive incentives. They want desperately to remain in Utah, to continue doing what they love in the state that they love, but their job prospects are improving elsewhere.

When discussing the Motion Picture Incentive Program with others—especially with those, like yourself, in a position to affect its continued implementation—a lot of the focus is placed on the funding and where it goes. Opponents of economic incentives—regardless of the form that they may take—often misrepresent such proposals as “giveaways” to outsiders, suggesting that there is no clear “Return on investment” when, in fact, the return on such investments can be quite extraordinary—especially when it’s understood that the investment is actually in our own community, not in “outsiders,” and the way that the incentive is structured, potential beneficiaries cannot receive it until after they have completed their projects, meeting specific requirements that clearly demonstrate how their efforts have directly benefitted Utah and its citizens.

In order to quantify the impact that the Motion Picture Incentive Program has on Utah’s economy, the Motion Picture Association of Utah—of which I am a member—enlisted the services of Olsberg•SPI to conduct a study, which has been published this year. I would like to draw your attention to some of the data that stood out to me. In particular, that which was presented in a pie chart titled “Breakdown of Production Expenditure.” The amount of which is not as significant to me as knowing where it went. 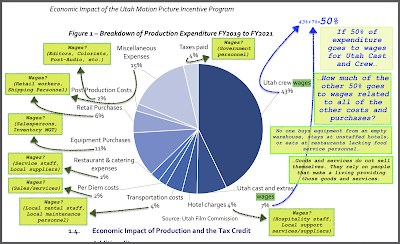 According to the chart, 50% went to Utah cast and crew wages while the other 50% was divided between a number of other standard production expense categories like equipment purchases, transportation, restaurants & catering, hotel charges, etc. Again, this is all money that is spent right here in Utah and, more importantly, represents economic “activity which would not have happened without the incentive.” (Emphasis added)

The study goes on to discuss the incentive’s contribution to job creation in addition to the employment of Utah-based cast and crew members. All those other expenditures that are shown in that pie chart, don’t take place in a vacuum. When a production buys or rents equipment, they don’t just take it out of an unmanaged warehouse. They're going to buy and rent from Utah businesses, employing Utah workers. Catering a film isn’t just about making food available, it’s about hiring Utah-based professionals to plan and prepare meals. Hotel accommodations and vehicle rentals wouldn’t mean much without the local staff that maintains them. If we applied the ratio of “Cast and Crew” wages to production expenditure to the other categories represented in that chart, then “wages” in general might account for up to 75% of those expenditures.

The study addresses this in terms of “indirect jobs” in the supply chain as well as “wage expenditure in other businesses.” Whereas the study uses jargon like “full-time equivalent jobs,” I simply look at it in terms of people—Utahns—making a living, supporting themselves, their families, and their community.

I don’t want to see any more of my friends and colleagues giving up on Utah for “greener pastures” in other states.