The business of short films

It’s generally understood that there's no money to be made in short films. The funds that are invested will simply not be earned back, regardless of one's efforts to monetize the completed project through sales or rentals, on physical media, or digitally. Just breaking even is elusive at best, and it's probably best to not even try and think about earning a “profit.” However, if the return on investment one seeks is knowledge, experience, and developing professional business habits that are essential to filmmaking, short film productions can provide that—but only if approached with the right attitude and those specific goals in mind.

Honing one’s skills by producing short films is not just about becoming a better technical filmmaker; it’s extremely important to remember that the business aspects of filmmaking cannot be separated from the process and need to be developed and sharpened along with every other skill involved in the craft.

Whenever two or more individuals agree to collaborate on a project, they enter into a contract and are, for all practical purposes, conducting business together. If that collaboration results in the creation of a “thing,” whatever that “thing” turns out to be, upon its completion, becomes an “asset.” By definition, an asset is “property owned by a person or company, regarded as having value…” This is true regardless of whether or not anyone else wants to buy it and begs the question: who exactly owns an asset that was created collaboratively?

If I buy a bunch of materials to build a structure in my backyard, I might ask some friends to help me. Their reasons for helping may vary, but since they’re my friends, that may be the only justification that they need because they don’t have a vested interest in the completed project. Since I made the necessary purchases and intend the project to be completed on my personal real estate, there’s a tacit understanding between my friends and me that even though they might be helping to build it, the structure is my property, not theirs.

The same thing cannot be said for the collaborative creation of intellectual property like a motion picture. A completed film is an asset, and knowing who owns it needs to be understood by all parties involved—ideally before any work on it commences.

As stated above, agreeing to collaborate is a contract. A “tacit understanding” suggests a verbal contract. While a lot of films are indeed produced under such agreements, they can be problematic if the completed project—the resulting asset—proves to be something of real-world value.

If a filmmaker sells a film for a substantial amount—equal to or greater than the equivalent cost of production—are they entitled to all that money? It depends.

Did that individual pay for all of the costs of production, including the salaries and fees of the entire cast and crew? If so, then the completed film is indeed their property, and they can sell it, deposit their check, pay their taxes, and move on to their next project.

However, if the cost of the production was shared by everyone on the cast and crew, then the question of who owns the completed film can get complicated. How complicated depends on the agreements that were entered into by everyone involved. What were the terms and conditions of the agreement? Was the agreement strictly verbal, or was it in writing?

All it takes for a verbal agreement to become problematic is for one party’s understanding of the terms to significantly differ from those of everyone else. The easiest way to avoid such problems is to simply write all agreements. In other words, to do one’s due diligence.

Some might think this would be obvious when producing a feature film or a television pilot, but is it necessary for a short film?

Having worked on features and pilots where I knew firsthand that standard due diligence practices were not being implemented, I can attest that it is NOT as obvious as one might think. Why? Because the filmmakers behind those projects had not developed the habit of prioritizing due diligence on their projects.

If a new filmmaker is producing short films as a means to gain knowledge and experience before taking on bigger, professional-level projects, then they need to treat every project—regardless of duration or distribution model—as a professional endeavor, following industry standards as closely as possible. 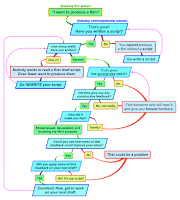 The cliché steps to becoming a “successful indie filmmaker” start with just making a short film. The problem with that oversimplification is that it glosses over all the steps involved in making any film.

The prospect of producing a motion picture for the first time is a very exciting one. So much so that it’s easy to overlook some of the most basic requirements before trying to recruit cast and crew members.

Have a completed script

By completed, I don’t mean a finished first draft. I’m talking about the product of several drafts, critiqued by experienced readers whose opinions are taken seriously and applied to subsequent revisions. This should be followed by a thorough script breakdown to get a rough idea of how much it will actually cost to produce the film.

Let’s pause at this moment to understand something that’s extremely important: There is no such thing as a “no-budget” film. Capital—liquid (cash) or otherwise (time/labor/sweat equity)—is always spent when producing a film. It’s only a question of how much and by whom.

In addition to developing professional skills, new filmmakers may also need to unlearn some habits they may have picked up as students and/or novices. When the only thing on the line was a letter grade or just meeting a deadline—low stakes make it easy to justify cutting corners. When one is accustomed to working with limited resources, one tends to embrace a scarcity mentality—often to the detriment of the completed project in terms of quality.

As professional filmmakers, it’s important to not confuse scarcity and frugality. The former assumes there are not enough resources to do what one wants. The latter considers how to make the best use of the resources one has.

Who writes a business plan for a short film?

Filmmakers who’ll need to know how to write a business plan when they’re ready to make a feature. That’s who!

If one intends to hone their filmmaking skills by producing short films, they need to hone their business skills as well. A business plan for a short film contains the same elements as a feature. This means that it should include a production budget that assumes every element—from cast and crew day rates to rental fees for kits, locations, and props—must be paid for. Never assume that anything can be acquired “for free,” especially the time and talent of others.

Budgets should always prioritize people over everything else. Knowing the value of the work, equipment, locations, etc., needed for a short film will help inform one’s ability to accurately estimate budgets for future projects.

With the script having been broken down into its budgeted elements, arriving at a practical estimate for the total cost of production, the business plan is complete. The next step is figuring out how to pay for the production.

Paying to produce your film is an investment in your career

If the return on one’s investment in short films is going to be knowledge, experience, and developing professional habits, it’s a given that there’s no expectation of monetary profit. That does not make the production a “nonprofit” endeavor. Film production is not charity work. Instead, one should consider their short film as a “loss leader.”

A loss leader is a marketing strategy in which a product is sold for less than the cost of its production—i.e., at a loss—specifically to attract customers. If the product is popular enough to generate additional demand, subsequent sales of the product in larger batches can eventually absorb the initial loss through economies of scale. Alternately, the manufacturer may recover their investment by selling profitable accessories for the loss-leading product.

A filmmaker’s loss leader “product” is a short film. The “customers” they hope to attract are industry professionals. The beginning of a filmmaker’s career is a critical period. In addition to entering a professional field with limited experience, they also lack any sort of reputation. How they choose to develop that reputation can have serious ramifications on their career; much of it comes down to how they treat their cast and crew.

While a film itself can showcase the technical skills of all participants in the production, it cannot effectively communicate the professionalism of the filmmaker behind it. That inevitably falls to the cast and crew when they move on to other projects. Vetting potential collaborators is not approached casually by professionals in any industry. A compliment expressed regarding a project by a new filmmaker is almost always followed by the question asked of the actors and crew members they hired:

Almost every filmmaker can relate a personal experience about working on a production for which promises of “deferred compensation” and/or “exposure” were never realized. The producers behind such projects don’t get very far in the industry because they are so desperate to add another project to their resume that they cut corners, their due diligence is often lacking or an afterthought, they don’t pay people—or grossly underpay them when they do—and they make the same mistakes over and over again because they’re so busy trying to crank out new content that they don't take any time to be reflective about their own work, to learn how to improve their craft, or to effectively manage their own intellectual property. They might end up with a catalog of titles that looks impressive when scrolling through their filmography until one learns that few—if any of them—are actually salable. By approaching their early projects with an attitude of “having fun,” they failed to learn that the business elements of filmmaking are inextricably embedded into the art form itself. When called out on this failure, they are often dismissive and fall back on claims of being an “artist” and that they’re “not in it for the money”—while still dreaming of selling a feature produced on a shoestring budget for millions of dollars to an arthouse distributor.

It’s okay to not be “in it for the money,” but one does need to be in it for a living. Utah filmmaker Ryan Templeman of Parking Garage Pictures puts it best:

“Knowing the business side of filmmaking doesn't make you any less of an artist. It makes you a reliable resource for those who want to do business (i.e. make art) with you.”

It cannot be emphasized enough that a short film cannot be a loss leader without making a capital investment—i.e. spending money on the production by paying the cast and crew. This is essential to “developing professional business habits” that will continue to serve the professional filmmaker throughout their career.