How to NOT make a short film 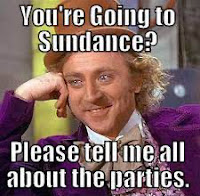 A lot of filmmakers start out with the idea of developing their* skills on short projects with the hope of applying what they learn to features. This is not a bad approach—in theory—but I've also seen a lot of new filmmakers try to rely on the cliché steps to becoming a “successful indie filmmaker” instead of learning to develop an actual business plan.

For those unfamiliar with the folklore associated with independent legends like Linklater, Rodriguez, and Smith, the supposed formula to their ascension to the pantheon of cinematic deities has been distilled into the following:

Most new filmmakers screw up before they get to step #1.

Why? Because they're impatient. They allow themselves to become so infatuated with the folklore surrounding their heroes that they don't learn—or easily forget—just how much time and effort professional filmmakers actually put into their craft.

In their desperation to just “get something made,” they cut corners. Like trying to recruit cast and crew before they’ve even finished the first draft of their script—to say nothing of believing that any first draft is ready to go into production.

As soon as people start asking questions like, “What’s your budget?” they deflect by saying, “Oh, we’re just doing this for fun,” and recite steps 2 and 3. It’s at this point that professional filmmakers will walk away, leaving the work to be done by people without the skills to do it well—or the experience to recognize that it may not be worth doing at all.

If they do manage to get a cast and crew together—all willing to do it “for fun,” “the experience,” or “their reels”—they might hit a wall when they discover that “fun,” “experience,” or “reels” cannot pay for locations, proper equipment, or craft service.

When the “perfect” location they wanted turns out to be unaffordable, they cut another corner and settle for one that’s not right, or barely serviceable, but “free.”

Then they hear that Netflix won’t accept anything shot at a resolution less than 4K so that means that they can’t use their DSLR so they try to get somebody on board who owns a RED or a BMC—or they rent one out of pocket “for the love of the art form”—believing that every dollar they do spend is going right up on the screen and that the resolution of the sensor will make up for the operator’s lack of experience. So money—or credit—gets spent anyway to try and make up the difference.

If they manage to shoot something and edit it together into a form that resembles a completed film then more money—or credit—is spent on step #2, they cross their fingers, and they wait.

Then, they get the BIG NEWS!

Their short film has been “accepted into Cannes!!!”

It’s so exciting! They’re so happy and proud that they announce it on social media. All their friends from film school—or on Facebook who all belong to the same two-dozen filmmaking groups—congratulate them and they think they’re moving on to step #3…

Of course, somebody will click on the link and see that their short film was indeed accepted into the “Cannes Film… Awards.” Not the Cannes Film Festival (that’s a totally different and legitimate thing). Oh, and the “Cannes Film Awards” is an “online festival”† so no theatrical premiere in a posh restored historic landmark theatre—and it has to be spelled with “re” not “er!”—no red carpet, no photo ops for the press in front of a fancy step-and-repeat backdrop. But they do get to download some laurels to photoshop into their movie poster.

Does “somebody” tell them that their film has not been accepted in an actual film festival? Probably not. Why ruin their fun?

*My use of the pronoun "they" can be inferred as either singular or plural.

†Is the server that's hosting it actually located in Cannes? Does it even matter?